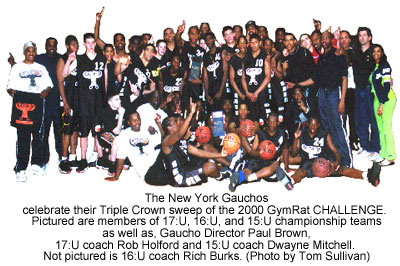 After making unexpectedly early exits in the 1999 GymRat CHALLENGE, the New York Gauchos left no unanswered questions in 2000 by completing an unprecedented championship sweep in all three age divisions. The Gaucho Triple Crown accomplishment is made even more impressive when placed in the proper historical context. Since inception, there had not been two GymRat CHALLENGE champions from the same STATE, needless to say the same city or the same program in this event that annually draws over 100 teams from throughout North America to Albany, NY during Memorial Day Weekend.

In the 15:U age division, the Gauchos moved past #8 seed Binghamton Stop DWI and #5 seed CNY Action Center to face the #7 seed Smyrna (Atlanta, GA) Stars in the final. The Stars had upset the Long Island RoadRunners in the first round of Championship Bracket play, and then moved past #6 Mountain B-Ball to meet the Gauchos. Despite impressive displays of athleticism from Smyrna’s William Canady and steady perimeter shooting from Bryan Smithson, the Gaucho balanced attack led by Joe Sanberg’s 21 points, wore down their Georgia opponents en route to a twelve point triumph and the first of three Gaucho victory celebrations.

Gaucho redemption continued in the 17:U age division one hour later when the eldest group avenged their 1999 first round Championship Bracket loss to Emeka Okator and the Houston Lynx by defeating the Long Island Lightning GOLD 69-54 in the 17:U final. The Lightning reached the finals after ousting the 1999 GymRat CHALLENGE champs, Jersey Shore Warriors in the semis. In perhaps the most entertaining game of the tournament, the Gauchos edged out a 65-60 victory vs. the Diaper Dans of Virginia in the other semi final. OJ Matthew’s Dans, who reached the semis by defeating the San Antonio Future and Jersey City Bondsmen, were paced by Sam Giles’ 13 points and 12 rebounds, while Ryan Williams of the Gauchos connected for 12 of his game high 18 in the second half. In the Championship contest, tournament Most Valuable Player, Ryan Williams of Cardozo (Queens, NY) led the explosive Gaucho offense with 17 points and 11 rebounds to offset a gutsy Lightning squad led by Tom Femminella’s game high 26 point barrage.

The 16:U Gauchos completed the trifecta vs. their NYC rivals, Riverside Church, in perhaps the tournament’s most bizarre finish. This hard fought Big Apple battle was tied with :24 remaining when Donnie McGrath scored to give the Gauchos a two-point lead. As Riverside attempted to tie, McGrath picked off a cross court pass and raced to the basket for a seemingly game clinching lay-up with :08 remaining to give his team a 64-60 lead. However, the 17:U and 15:U Gaucho teams watching the game could not contain their excitement, and rushed onto the game floor preventing Riverside from reaching half court. The Gauchos were assessed an indisputable technical foul in a scene reminiscent of the now infamous Stanford/Cal Band football game. Riverside’s Rob Barrett calmly sank both technical free throws with :04 remaining to set up the possibility of a most unpredictable comeback finish. After two time-outs, Riverside inbounded the ball to Mikial Mikol whose buzzer beating three-point attempt fell just short. Barrett and Mikol led Riverside who reached the final by defeating Metro Boston, with 15 and 12 respectively. The Gauchos, who defeated their NY Metro rival Westchester Hawks in the semis, were led by a game high 18 from McGrath.